IMPORTANT:Read The Letter Below BEFORE You Use The Crash Course (Please allow 10-15 minutes for delivery)

.. I feel they have made a massive difference... I feel my confidence whilst speaking has improved enormously... I’m impressed!

How You Can Make The Best Head Start On Your English Pronunciation:
Even If You've Tried And Failed Before

If you're learning Standard British English pronunciation, chances are you don't know where to start.

...but these 'accent tips' are not aimed at your particular accent, so you have no idea how to get from A to B.

And that's understandable. When people first come to me as a coach, they've struggled with really identifying what it is that makes them sound different, and which are the most important sounds to focus on.

And once that's been identified, up until recently, the only way to really know what your specific habits are for these important sounds has been to have a specialist there listening to you and coaching you.

It's a bit undemocratic, and rather frustrating.

As a voice coach, I know this situation very well. But fortunately for my clients, I do know EXACTLY which sounds to prioritise for each person - just like I did in the first case study below.

The goal is always to get their accent transforming as quickly as possible. To pick those key sounds that will have the biggest impact on their speech, and get working on them before touching anything else.

After hundreds of hours of coaching and experimenting, I was noticing a pattern.

I realised that I was very often focusing on the same 3 consonants and the same 3 vowel sounds - almost every time. You might call it the 'Top 6' of British English sounds.

And once I go through these sounds with a client, the results are really encouraging:

Natalia is a Moscovian, who is the manager for a busy high street retailer. This native Russian speaker simply wanted her customers and colleagues to understand her better.

I identified that she was using what we might call a 'hard' TH sound - in other words, it sounded more like a T or D. Because of this, when Natalia said, 'thought', it sounded like 'taught'. Or when she said 'those' it became 'doze'. You can imagine the impact this had on her intelligibility.

I coached Natalia through a little-known technique I use all the time to improve the 'lightness' of the TH (strangely it has something to do with the L sound).

Now she was able to produce the correct, lighter, TH sound and apply it to words. And soon, she was using my 'lexical sets' and 'word bank' approaches to bringing the lighter TH into her everyday speech.

Why is it part of the Top 6 sounds? Well, firstly, it's a sound that both natives and non-natives can struggle with; even those who have the TH sound as part of their native language often don't realise that there are two types of TH in English, not just one. And secondly, it has a massive impact on people's speech: just consider how often you use words like the, this, then, that, those, think, though, ...

But it's just one of the 6 sounds I constantly rely on to give the biggest impact for my clients, and to give them true momentum in their speech development.

Now it took me a couple of hours to coach Natalia through this, and although she received tremendous value from the one-to-one work, I knew there could be a more efficient way of delivering this knowledge and sharing these techniques.

So I started recording everything down. Italian, Persian, Japanese, Spanish, Indian, Chinese, you name it - I was creating an 'accent archive', keeping records of all the different habits people displayed in each of these 'Top 6' sounds. It was a treasure trove of knowledge, distilled from years of coaching, and I was very proud if it.

And I didn't stop there - I knew people's frustration of being told (for example) 'your tongue is too high for this sound' but having no idea how to change it. So I began noting down the precise technique for each and every habit in my 'accent archive'.

This was becoming less of my personal archive, and more of an 'Action Plan'.

I decided to hand it to one of my associates:

"As a voice coach I'm very aware of the sheer breadth of habits people can have in their speech. So, to be honest, I was surprised at how holistic this Action Plan was - there is something for everyone, and each sound has habits laid out very clearly for the novice to understand. People who use this resource first tend to be much, much further ahead in their speech by the time I start coaching them."

Paul used these methods to help people from all over Asia, Africa, Europe and the North and South America.

In a sense, I had handed over the keys to my 'vault' of notes, observations, techniques and materials for these 6 sounds.

So until that point, I hadn't really 'released' this information into the public domain - I was rather resistant to share it any further, but it soon became clear that it would be an incredibly helpful starting point for anyone beginning their journey in moving towards a Standard British English accent.

I knew I could deliver this Action Plan as a 'hands-free' self coaching system to people that wanted to get started on a budget. So I did exactly that, laying out everything but this time with the same sequence of steps and the same simple language that I use in my coaching.

I also bundled in audio so it felt like the learner was right there with me as I coached them through the sounds and techniques.

I knew the information inside was pure gold, but I wanted to make sure that a new learner would find it just as useful and simple to work with, without extra coaching from me.

So we put it to the test:

I'll get to the point with this one: Mahesh was finding difficulty with each of the Top 6 sounds, and as soon as he started on the Action Plan he found his speech becoming much more confident and clear:

“ The material is unique and very useful... the tips on tongue position and lips were easy, intuitive to learn and I feel they have made a massive difference... I feel my confidence whilst speaking has improved enormously... I’m impressed! ”

So the reason I'm showing you these case studies, and the reason I created this Action Plan in the first place, is that I want to make something crystal clear:

Taking that first step in working on your accent needn't be complicated.

Your Best Head-Start In Speech Transformation 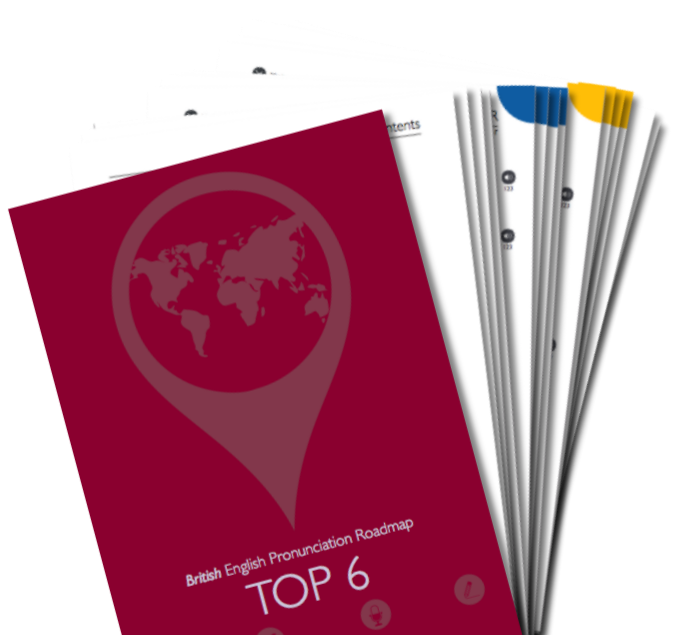 I'm going to give you my cherished 'Top 6' list of sounds, where inside I'll coach you through them step-by-step. I go through every single variation that speakers might be using for each sound, so that you can identify your own habit and then change it.

I lay out all the possible variations you might have on one digestible platter, and guide you through each one so you can listen and identify which applies to you. And then we'll get to work on how to change your habit for each sound.

- A 49-Page PDF Action Plan, taking you through every habit for each of the 6 sounds

- A Bonus Section outlining the rules and patterns for the most crucial of the Top 6 sounds: the R consonant

- ADDED BONUS: Access to our Private Facebook group, 'EPR Community'. Get access to English Pronunciation Roadmap coaches, including myself, asking us any questions you like about your  challenges and curiosities with pronunciation and using your voice. You'll also get to connect with other like-minded professionals, students and actors - all providing support and tips for the whole community.

Now to be absolutely clear, I am not one of those coaches revealing so-called 'secrets' or a 'magic formula'.

The speaking habits I've compiled here are probably available - if you chose to spend hours and hours trawling the internet and dry text books on phonetics and phonology.

But what you WON'T find are the proven techniques that I have tried and tested over years of coaching experience - techniques that explain actually how you will alter your specific habit for each of these crucial 6 sounds.

And you certainly won't find all of this material accompanied by studio-quality recordings of every sound and habit.

This Action Plan will:

Don't Get Lost In The Sea Of 'Accent Tips' And Advice...

I really want you to 'hit the ground running' with your accent.

In the past, this information was just for myself - and for trusted associates - who would use it much more exclusively.

But now you needn't go it alone!

As I have said, this Action Plan is usually delivered through private, 1-to-1 coaching sessions.

Depending on your coach, going through these 6 sounds would normally take two hours, at a cost of £200 (and beyond).

Elsewhere these Action Plan guides are available individually for £10.50.

But for a limited time, as a subscriber and community member, I'll let you have this Action Plan for as little as £4.50.

So for the cost of lunch you can be well on your way to mastering the 6 most important sounds in British English.

The choice is yours...

Click the 'Add To Cart' button and start working on your accent today:

I'm not ready yet, please take me to my download.

Still sitting on the fence? Here are answers to some of the most commonly asked questions...

Grab Your 'Action Plan' While It's Still Here...

Order now and get...

No thanks, I'm not yet ready to work on the top 6 sounds in spoken British English.

I just want to download the 'Crash Course' in British English Pronunciation.